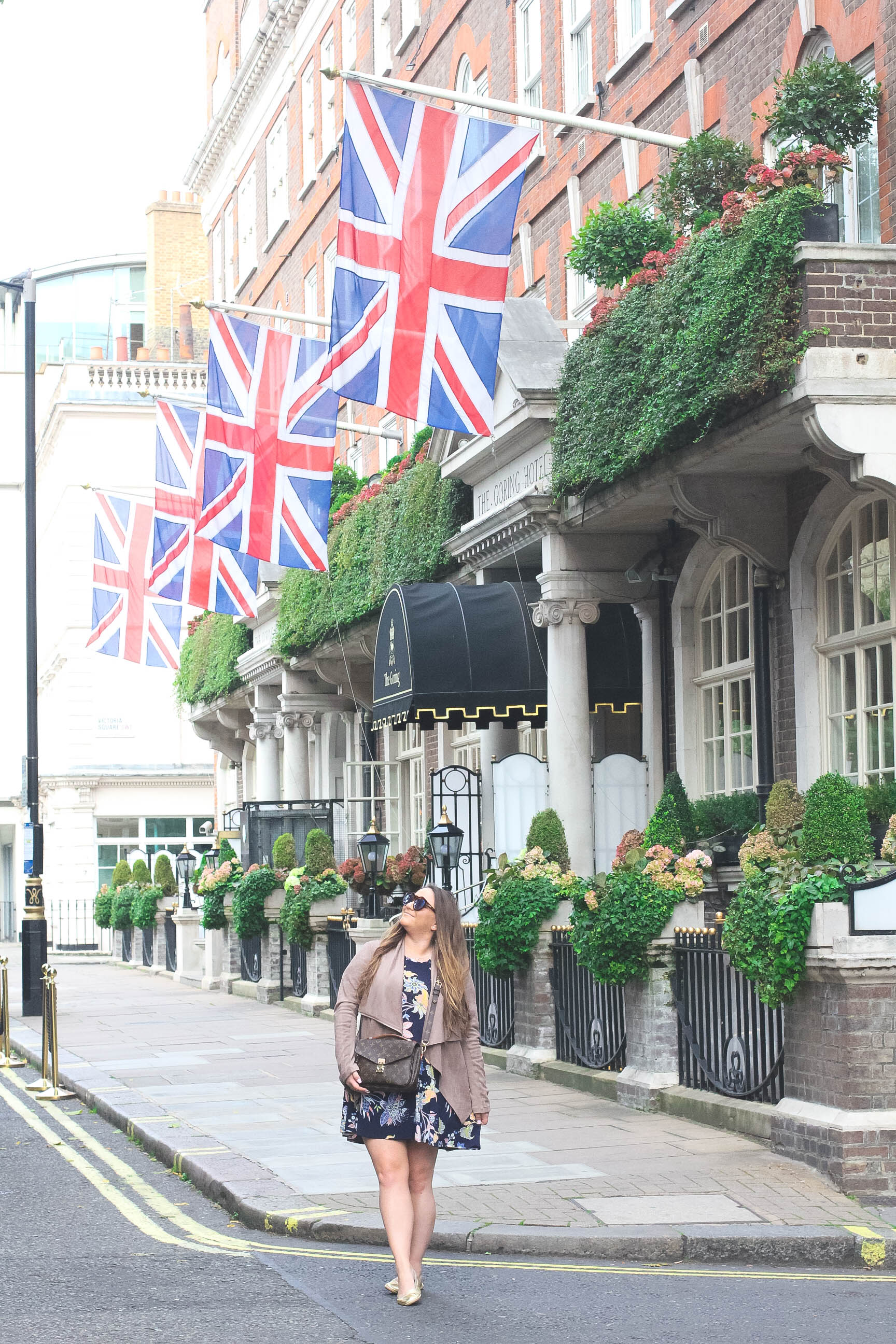 Happy Monday Babes ♥ I feel like I am finally getting back into the groove when it comes to blogging. Between traveling and transitioning into an exciting new job (ICYMI I am finally working at a place where my creativity + ideas are well appreciated + can actually be executed – it is BEYOND thrilling + satisfying hehe) I have been slacking a bit on the blog front – it is hard to balance everything…let me tell ya :p BUT slowly but surely I am throwing myself back into my passion – my blog!

Something I realized while experiencing London with Mike, is that if you told me a year ago I would be traveling outside the country with someone who is the ying to my yang I would never have believed you. I was always stuck in this state of mind of ‘work work work‘ which got me to where I am today however it never made me feel fulfilled. I always dreamed of being at a job that provided me a work/life balance, a place where I was happy and encouraged to speak up + a place where I can let my true talents shine. I thought I found that place at my previous company however I was in for a shocking surprise. In light of all the work place harassment that is coming to the surface in various industries, it is important to know that while a lot of hostile work environments come from sexual harassment (Harvey Weinstein is beyond repulsive + the fact that he got away with his grotesque treatment of women for so long is astonishing) harassment comes in all shapes and sizes…from men + women. Sometimes harassment isn’t an inappropriate gesture or encounter, sometimes it is simply verbal + can really shake someone to their core.

Let me start by saying this (pre-face this is a bit of a personal post), I have been passionate about social media + influencer marketing since I began my career 5 years ago. I worked my a** off to get to where I am today, to build up a network of influencers who always have my back + support every journey I take, a network of colleagues that always jump to help me anyway they can and a passion that has (and still is) my driving force to always do better than the day before. One of the worst moments I have ever encountered in my career was realizing that ‘Mean Girls’ aren’t just an issue teen girls deal with in middle school + high school…the reality is that even as an adult ‘Mean Girls’ are still out there – pretty crazy considering we are in a time all about female empowerment, raising each other up, supporting each other etc.

What I experienced was something that taught me a lot about the type of business woman I am + will forever be…real. For the past year I worked with an amazing team of people that taught me so much, helped me grow + showed me what an asset I am to any team…what I also learned + experienced for the first time was the ‘boss’ who validates themselves by bringing others down – sounds familiar right? (Regina George didn’t remain in high school let me tell ya haha). I didn’t realize this was a common occurrence until I read a few Forbes articles on the subject. Turns out that even though we get older, that doesn’t necessarily mean we grow up.

Maybe some of you have experienced a boss or supervisor trying to bring you down + can relate to my story and if not, I really hope it is something you never have to go through since it feels like a personal attack on your work ethic + passion…it sucks. After being at my last job for a good amount of time, a moment happened that will be stuck in my mind forever – it was a moment where I learned who I was, it was the moment I vowed to work for a team (and boss) that had more respect for me and appreciation for all the work I do, it was a moment I grew. I won’t go into too much detail but I was told that I had to be ‘put in my place‘, amongst other things – taking jabs about the job I have been doing etc. I sat there in shock – here I am an eager, hard working employee whose boss (that preaches female empowerment + being a ‘boss lady’) is telling me that basically there is in fact a ‘glass ceiling’ and there I was hitting it. I never thought much of the other comments + behavior that had been thrown my way since I started there, but it all felt like it has culminating to this moment. I instantly felt a pit in my stomach and sat there not knowing how to react. Still months later I think back to that day + am mad at myself for not speaking up, for not saying this is wrong for one female to tear another female down + for not just walking away right there but instead I pulled myself together, spoke to my family and Mike and it became clear to me that ‘her’ goal was to try and break me…that was something I refused to let happen.

I had watched this boss chew girls up and spit them out, now I have heard plenty of horror stories about Anna Wintour (my idol haha) + other powerful women but at the end of the day it isn’t a personal and vindictive attack, it’s business – what I experienced was different. Over the course of a year I saw various females at this company be spoken to in a condescending manner, told they weren’t ‘good enough’ and basically harassed in order to encourage them to quit or lead them to being joyous when it came to getting fired. Watching this (and living this) day in + day out made me sick to my stomach and I would tell my parents + friends, I don’t understand why someone acts like that, I don’t understand what provokes someone to insist on tearing others down. Well…as they say, you live + you learn, I learned from that boss (who thought the world of herself – let me tell ya haha) that no matter what position I am in, my morals + integrity will stay in tact, I will also treat others the way I would like to be treated (it’s funny – pretty sure I learned that from a ‘Barney’s Best Manner’s’ video as a child haha the saying still rings true no matter how old you are) :p

During that tumultuous time, I was loosing my passion for blogging, my career…everything I cherished so much about myself. It is crazy how one person can have that effect on you, but it happens. Fast forward to the day I walked out that door (knowing that I was off to a new company that fought for me and wanted me) I finally felt free. I got home, began packing for London, called Mike and literally said ‘I am free’. Life is too short to be anything but happy and when that plane landed in London + I saw Mike for the first time in months all the pain I was experiencing from loosing myself for a moment went away. I felt whole again, I felt invigorated again + I felt passion for what I love to do again.

All in all this story (other than getting this off my chest finally) is meant to show that harassment comes in all forms, there isn’t a textbook definition + so many people experience it on a daily basis in their work environments by both men + women. While I am not sure if there is a sure fire way to stop it, a simple start is to treat others with humility + respect…try it, it doesn’t cost a penny extra 😉 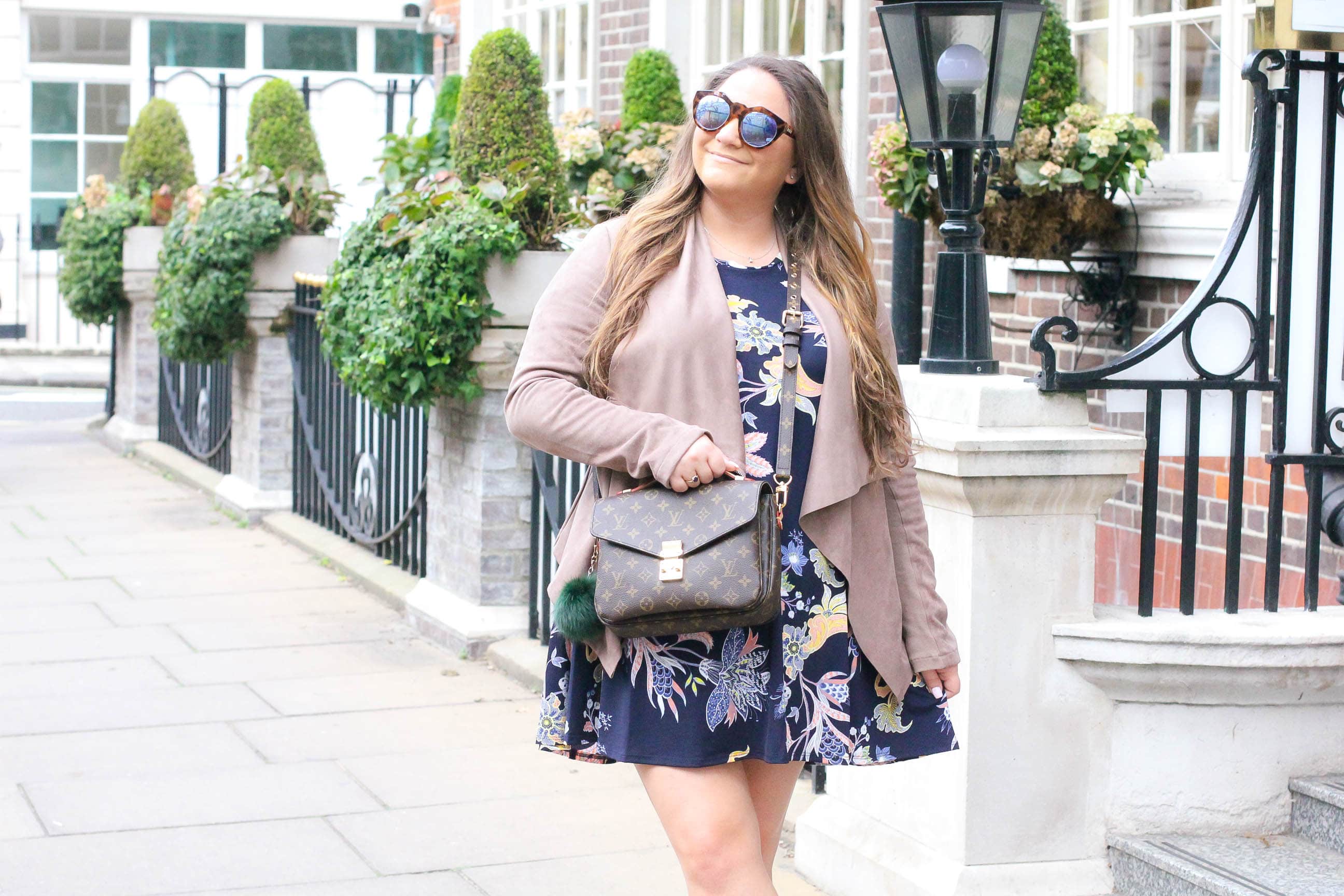 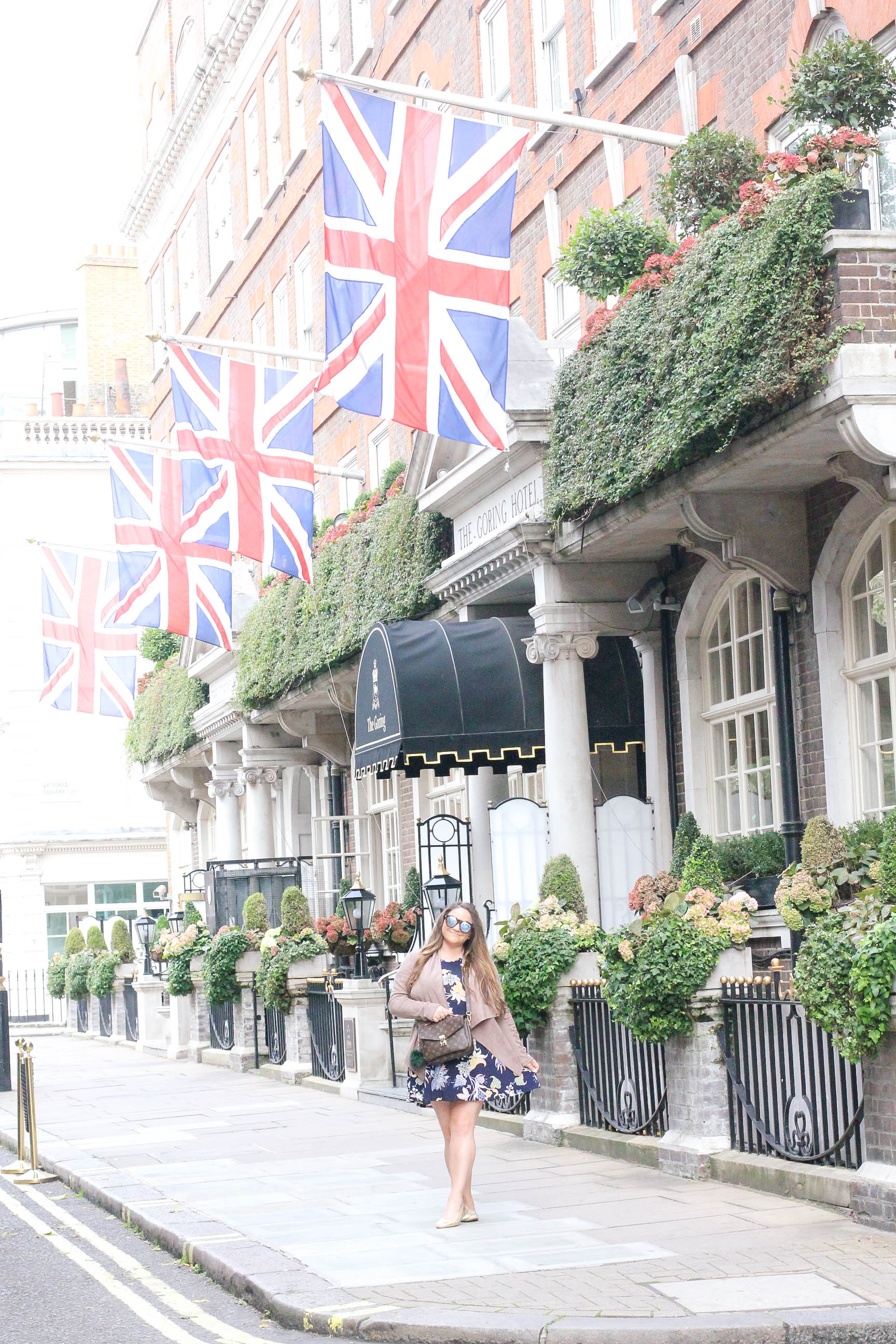 This outfit was shot the day after I landed in London, I was carefree, finally happy + couldn’t believe I was actually in LONDON!!!

My dress is from ShopTheMint one of my fav online retailers however I linked to some similar styles since it is currently sold out. As for my moto jacket, it was my go-to throughout my trip since it was easy to layer on any outfit while exploring the various tourist destinations (I even wore it around Paris).

I LIVED in these Yosi Samra ballet flats. I didn’t realize how much walking there was in London (very similar to NYC which I haven’t been back to in over a year haha) so while I wanted to rock my cute heels + boots everyday, these flats were more realistic + the gold color matched with everything!

I also rocked my Louis Vuitton Pouchette Metis daily since it was such an easy crossbody bag to wear around town AND have enough room for my multiple phone chargers haha and makeup :p 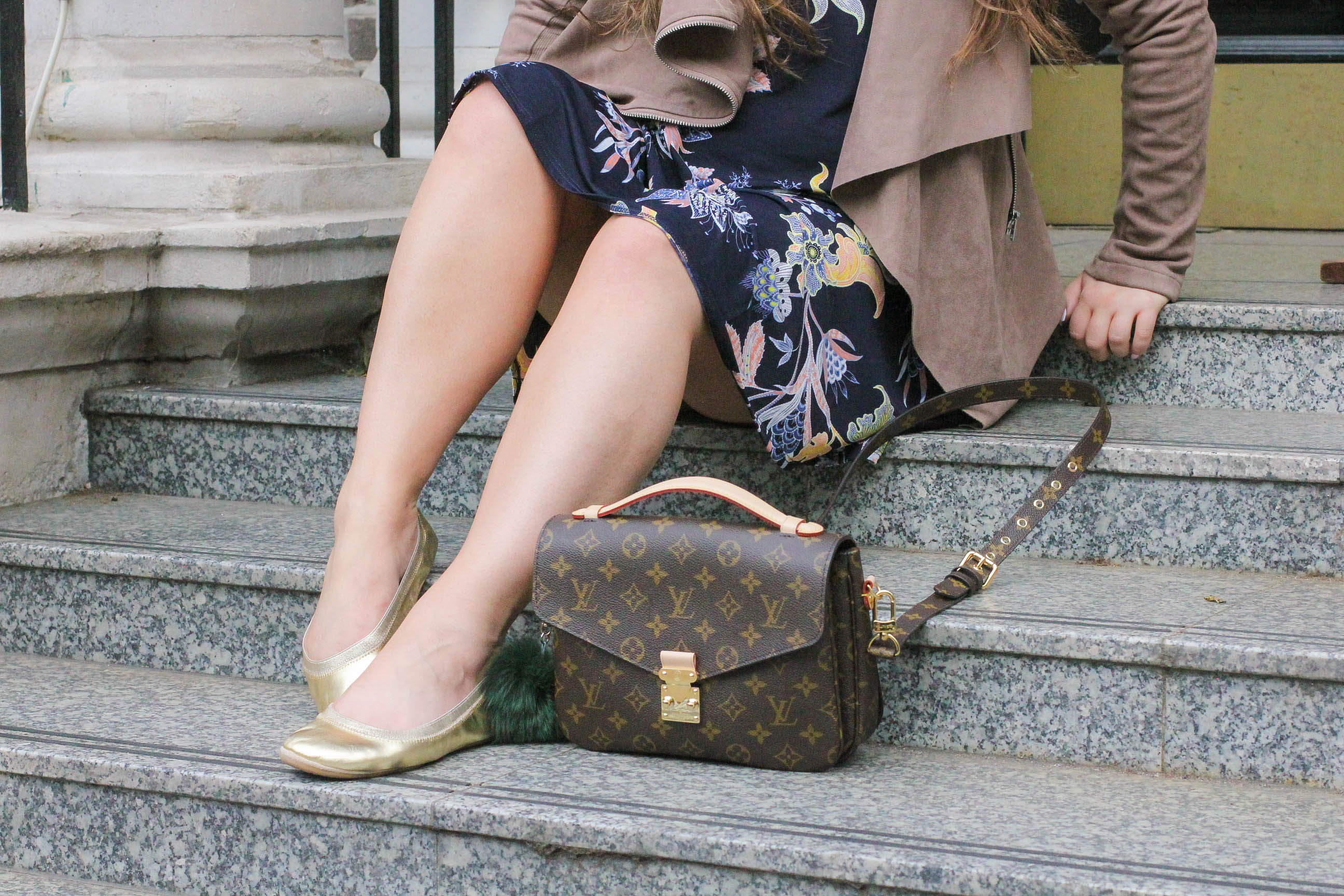 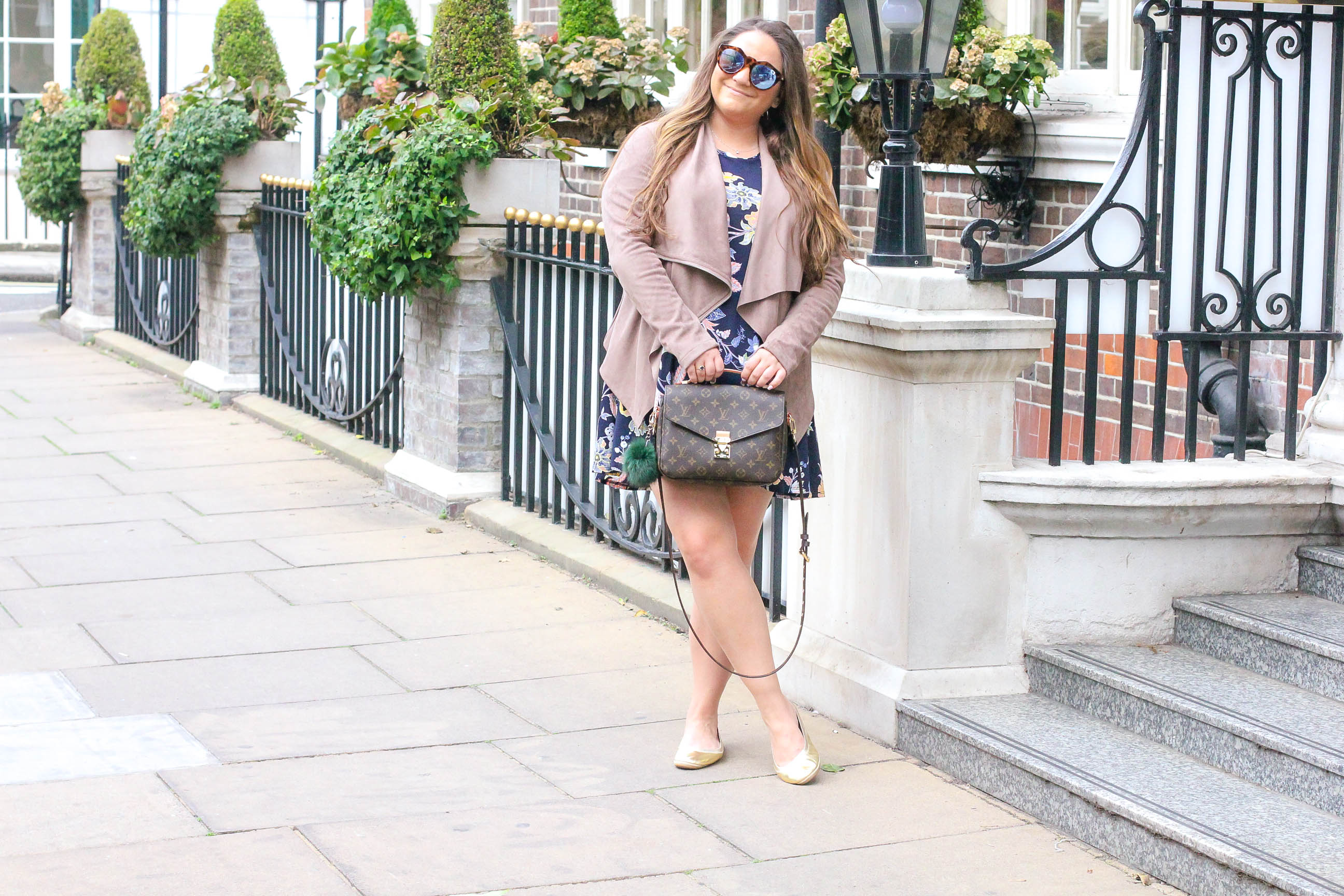 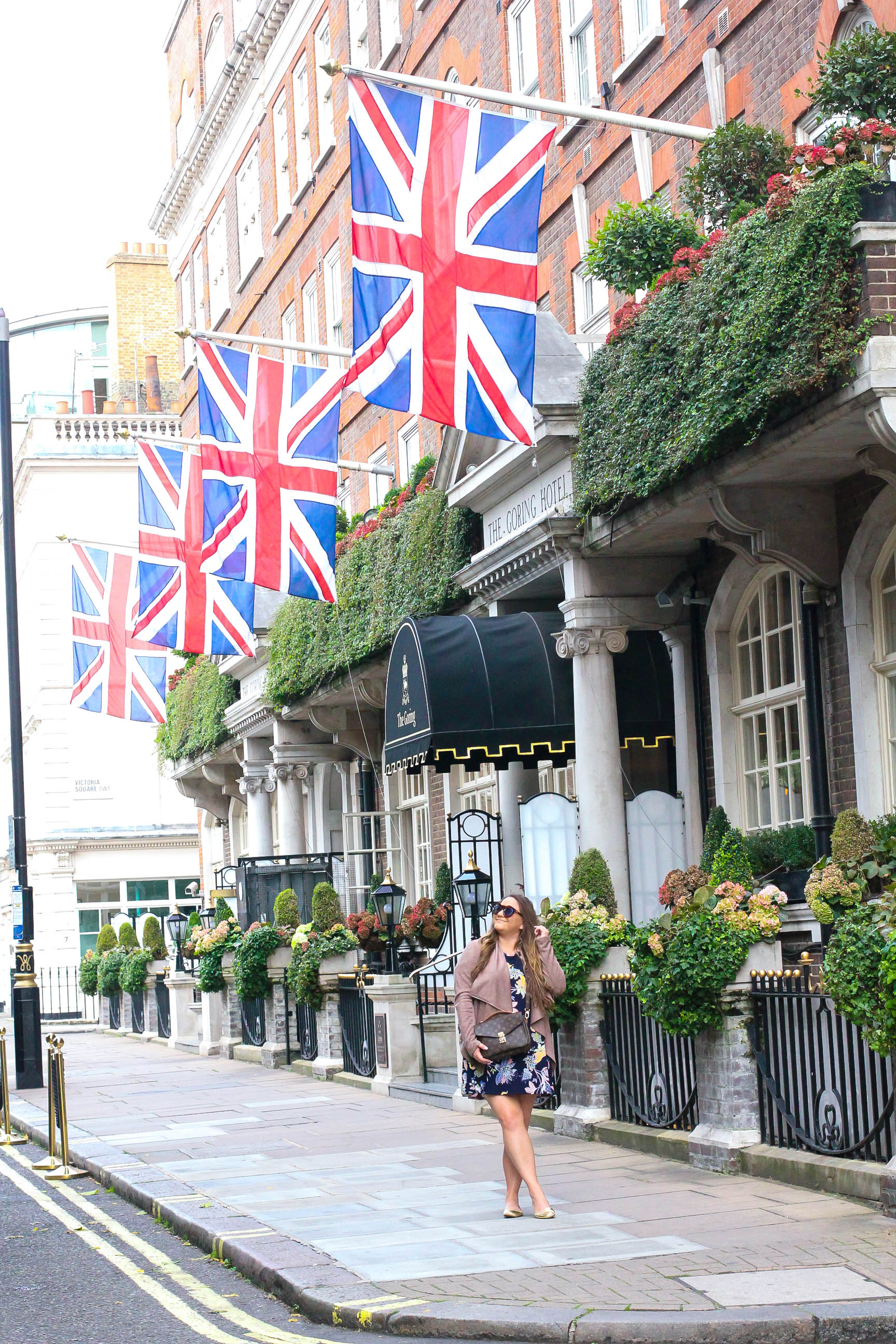 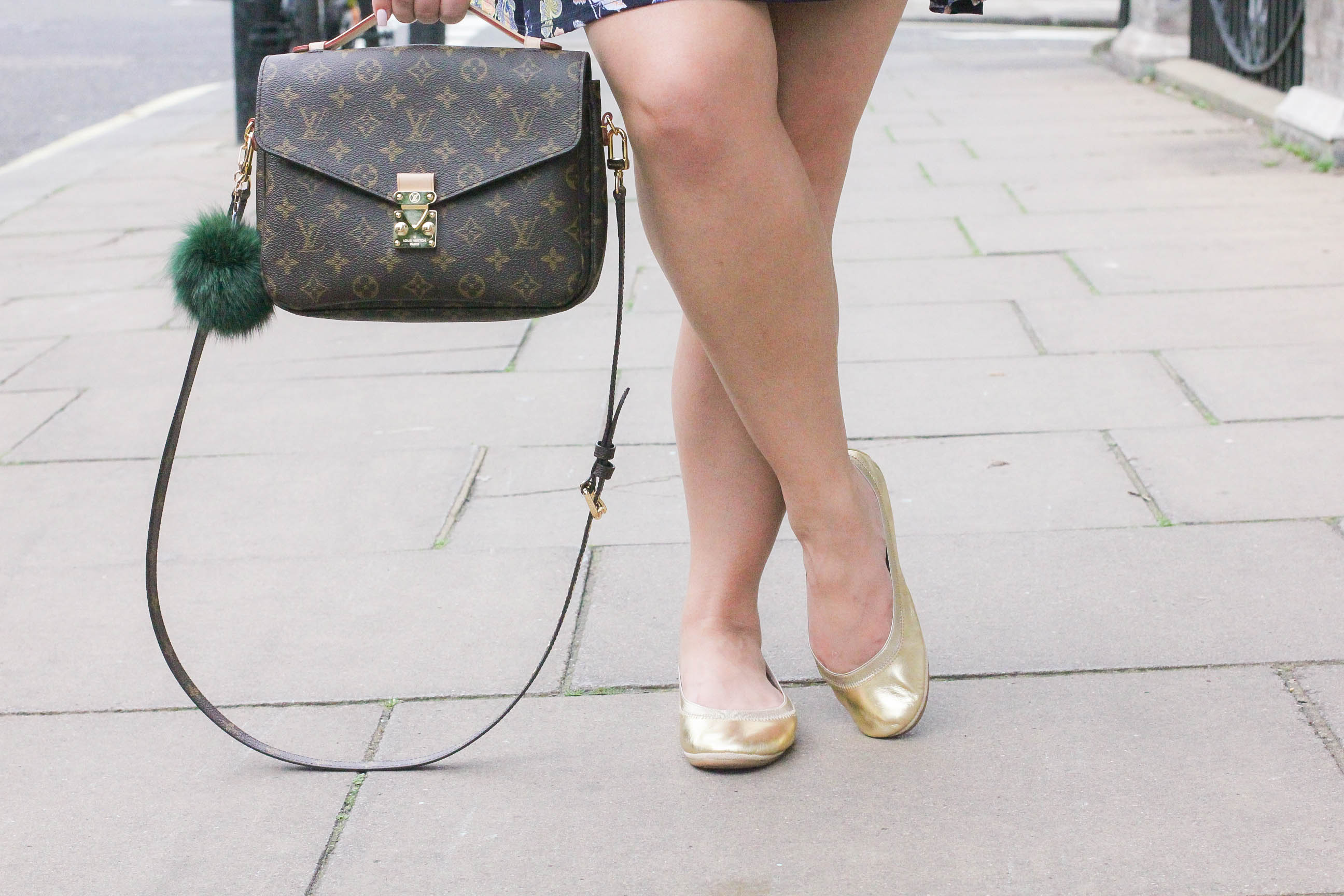 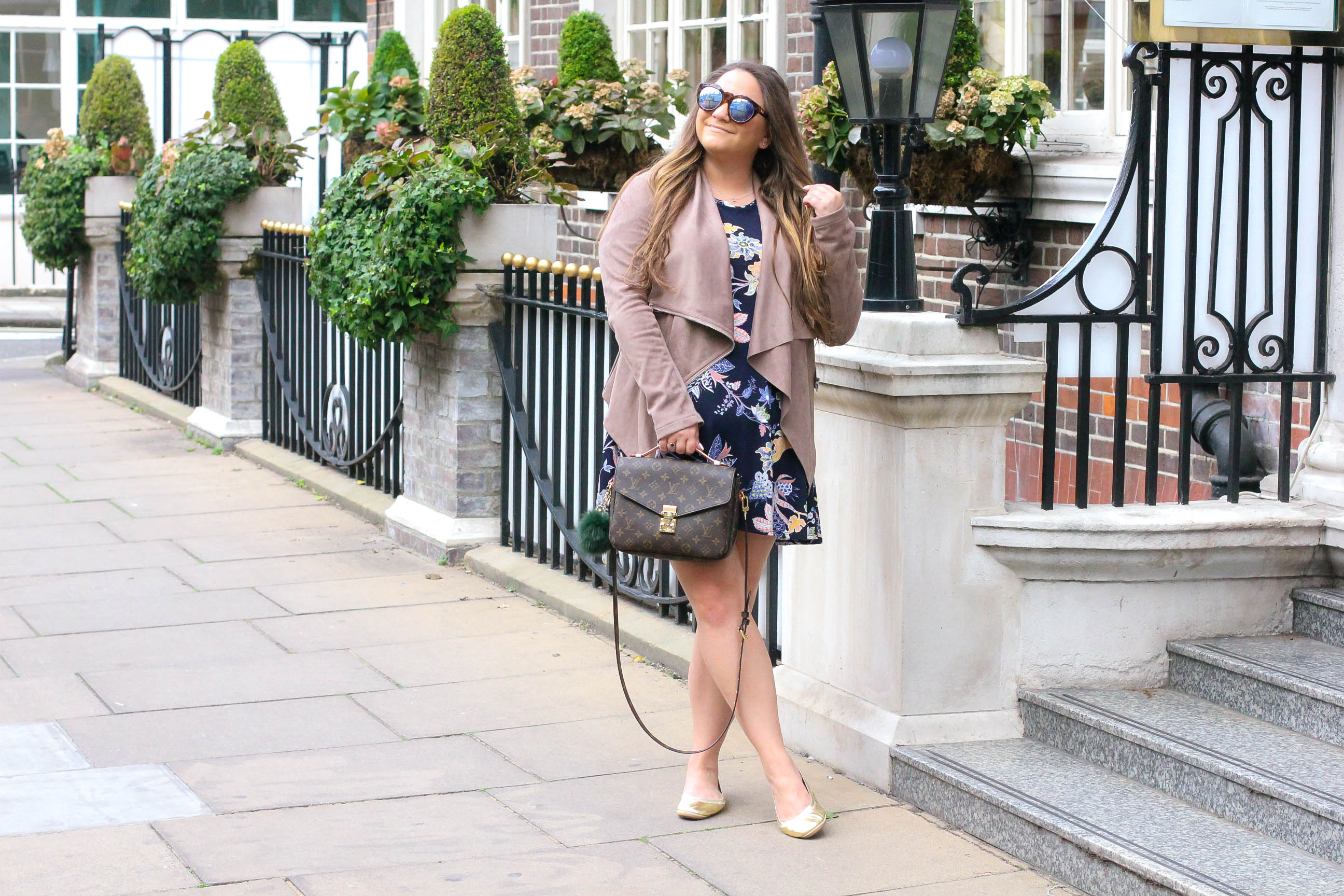 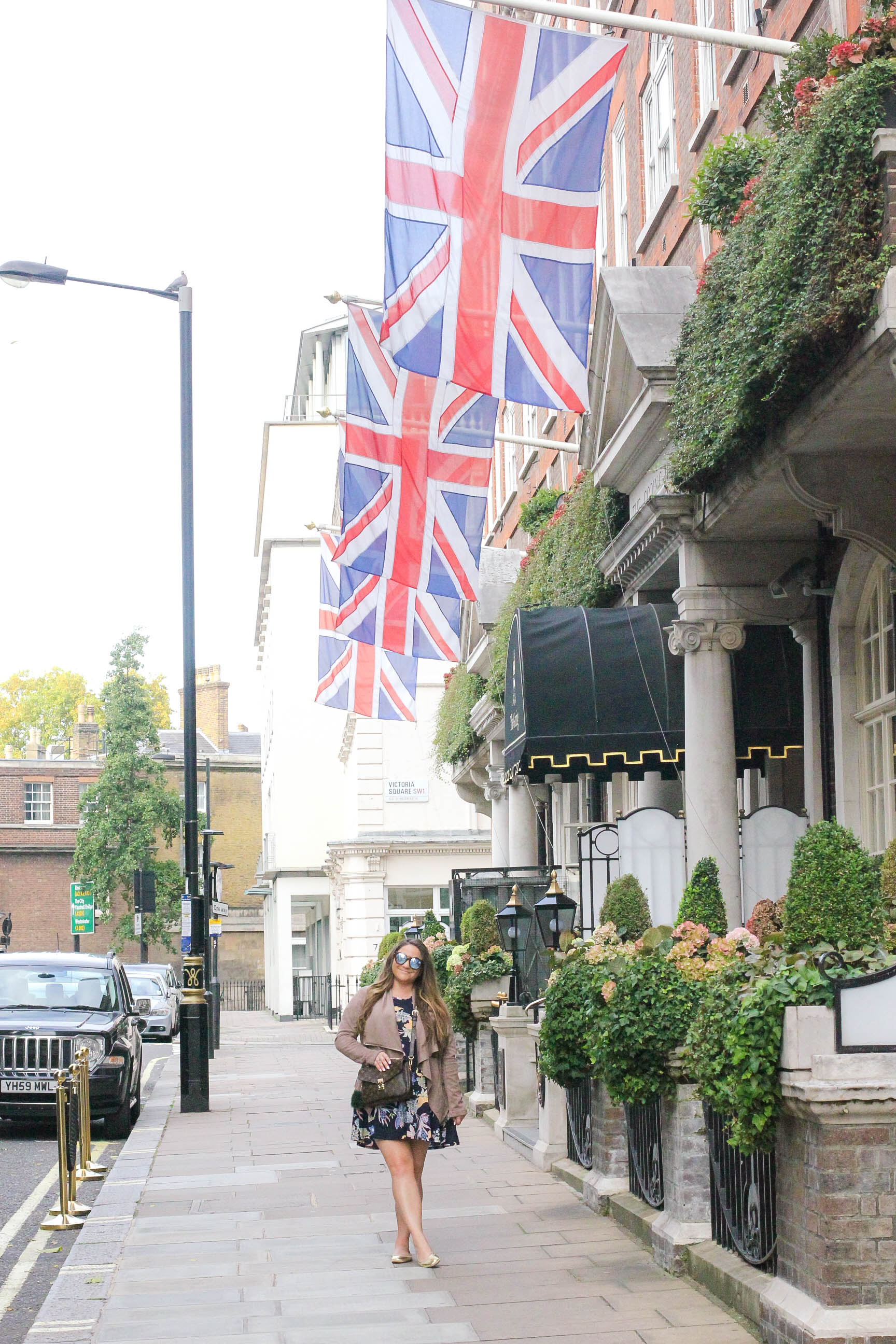